Check out this goal by Portland’s Danny Mwanga against San Jose on July 3rd. This is a perfect example of how the timing of a forward’s run gives just enough space to get off a good high-percentage shot.

Midfielder Franck Songo’o gets the steal at the defensive end and finds fellow midfielder Eric Alexander. The two combine for a nice wall pass to spring Songo’o down the right flank.

Freeze the video at the 12 second mark, and find Mwanga. Notice that while his defender has good goal-side positioning, Mwanga has the option of a long, flighted cross to the back post, or a flashing run to the near post for a hard pass on the ground. Now unfreeze and notice how he decides on the latter by changing speeds and sprinting toward the near post.

A perfectly placed low driven ball meets Mwanga a split second ahead of the defender, and that’s all he needs to slot it home. The midfielder’s service on this goal is perfect – a big mistakes wingers tend to make is sending that ball in the air. One more crucial element about this goal. If you freeze at the 16 second mark, you will see that Mwanga’s body is straight up and down. This keeps the ball from completely skying into the 12th row of the Timber’s Army – leaning backwards is a key mistake many forwards make.

Another subtle part to this play is Eric Alexander’s run after passing the ball to Songo’o. You will notice that he continues his run toward the goal (he’s the one raising his hands calling for the ball). Playing off of Mwanga’s run in front of him, Alexander makes a beeline toward the back post. Although he wasn’t used in the play, if Mwanga and the defender miss the initial ball, or if the keeper saves the shot, or if Songo’o decided not to make the near post pass, Alexander is there for an opportunity on goal. 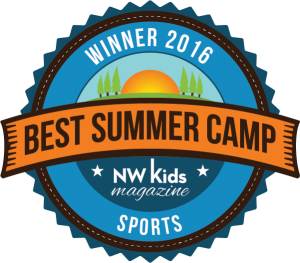